When I was in my first year at Paddington  Secondary School, summer arrived, and in the science lab, the teacher asked for volunteers to look after the animals. So  I volunteered to look after a little mouse for the summer. So after school, I took it home my mother knew nothing about the mouse. So I had to hide it so I did, in the front.  There in the front room was a huge dollhouse that belonged to my sister. I put the mouse in a small box and put it to the back of the doll’s house. Teddy our beloved brown tabby cat kept going to the front room door and was meowing to be let in, mum finally relented to the cat’s request and opened the door. Teddy heads straight for the doll’s house. So mum opened up the doll’s house and discovered the box with the mouse inside. She then opened up the box to see what was inside. She let out a  scream, dropped the box, and ran from the room. I was busted, My beloved Teddy had ratted me out.

The next part of the book is not so much about me, but about the area in which I lived and some of the people that touched my family life. Abbey Road, School, Mum‘s work, and The Beatles.Abbey Road Studios. Little Venice and the “ Cut “. Famous people that mum worked for. All these things happened just a few blocks from each other, here in London.

AsI said mum was a charlady. This means that she cleaned people’s houses, flats, and apartments in the Abbey Road Swiss Cottage area and the like. One of the people that she cleaned for was Sid James of the “ Carry On “ movie series James for instance was an extremely well know and well-liked comic film star and T.V. star. Of the ’50s to the ’70s or so. A really funny guy. Sid was one of mum’s clients. Sid was in Lots of movies and T.V. usually with the same cast. a bunch of comics. they were at the time very popular.

Yana was a nightclub singer and minor actress. Her claim to fame was that she was on the Bob Hope show. When mum was ever talking about Yana she would mutter that she suspected that she was a “call girl.” Where there’s smoke there’s fire. Yana was a beautiful-looking woman, and she had some really nice professional black and white photos of herself. So one day, mum asked if she could have one. Yana gave mum three but she charged her for them, this always pissed mum off. Yana was married three times and she had various affairs with people in the film and T.V. world.

Harrit Cohen  CBE was another one of Mum’s clients. Harriet was a concert pianist of renown. She is interesting reading. Harriet was born in London and always moved in the concert circles.

In the area of Abbey road where mum worked, was the Abby Road Studios, formerly known as the EMI Studio’s, located in St. John’s Wood.  Some really famous groups recorded themselves at these studios.  Namely The Beatles, Pink Floyd. The property at one time was going to be sold to developers. But the government stepped in and saved the building from the wreckers ball. and granted it English Heritage protection.

Little Venice is where I would hang out as a kid  Little Venice is a comparatively recent name for these parts of Paddington and Maida Vale, For the longest time a 100 years or so, this area of Paddington. it was just Venice but in recent history, the word  Little has been added. For Little Venice. A guy called Robert Browning was a poet and who lived at Beauchamp Lodge, 19 Warwick Crescent, in 1862–87. was Supposedly the first to name it Little. and from then on there were various others who allegedly called it Little. The name “Little Venice” was later formally applied to an electoral ward of the City of Westminster. but that was in recent times. 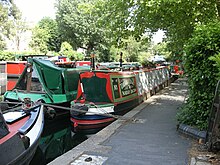 These are the exquisitely painted barges from the cut.  Seen here at Little Venice. It’s my understanding that you can nowadays take a vacation on one of these barges. So they go along the cut and park the barge each evening. And you go to the local pub, have a meal drink a few pints maybe play darts and go back to the barge to sleep. Next day along to the next pub. I would not think that today one would be towed by a cart-horse but they would all be fitted out with motor engines and they would just putt, putt, along the canal.

Fishing as a kid beside the cannel was very dangerous for Dennis and me as neither of us could swim, if either of us went in all would be lost from the water’s surface to the top of the bk was about 18″ to 2 feet. I’ve talked about the cut and Little Venice in a previous chapter. Where I described making a fishing thingy from a bicycle rim and some old sacking.And about the barges being pulled along with the cut by big Dray horses.

This area of London was always snobbish and even more so in to-days world.

The street crossing on the front cover of the Beatles Abbey Road. As a kid, I went over that crossing many times. Never thinking that in the future that this crossing will be seen all over the world.

This may be a good place to introduce yourself and your site or include some credits.